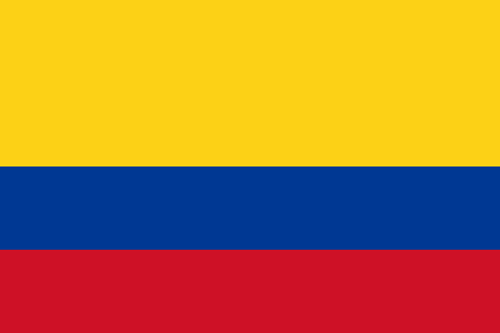 Climate:  Tropical along the coast and eastern plains; cooler in highlands

Information for Foreign Students in ColombiaGetting There
To travel to Colombia, you can choose Air Comet, a Spanish-Argentinean company offering flights to all Latin America countries for low prices, and which allows you to carry 2 bags of 23 kilos. It is a very safe company. However, you should always call 2 days prior to your departure to check flight schedules, as it may have changed sporadically.

Obtaining a Visa
For a student visa, the Consulate of Colombia requires the following documents:

· Two copies of the completed and signed visa application form, downloadable from the site of the embassy.

· A photocopy of the first five pages of your passport (with a minimum validity of 3 months) in duplicate.

· The original and the photocopy of the following documents:

- A certificate issued by the educational institution which indicates that the course attended has a schedule of 10 hours intensive work per week at least (translation and original).

- Documents proving the economic solvency (bank certificate, tax incomes, letter of admission, certificate of scholarship), translated in Spanish by a sworn translator. If your parents provide a financial support for your studies, the consulate request an additional letter of appointment signed by the guarantor, certified in Spanish and translated by a sworn translator.

- Certificate of the host educational institution (or company) in which the applicant has been accepted.

- Certified copy of the Approval Resolution from the Ministry of National Education of Colombia, or the corresponding "Personería Jurídica" of the University or school.

Upon your arrival, you must go to university to report your arrival and perform your registration. Your first obligation is to go to the DAS, in order that to be granted the "cédula of extranjería" necessary to perform most of the administrative formalities. It costs 115.300 pesos, about 37 euros. You will need 3 photographs and a blood type certificate. The queue is long, it will take between 2 and 3 hours, after which you will be issued a "contraseña", temporary card.

Accommodation
Finding an apartment in Bogota is not difficult. Due to the construction boom, the offers are numerous. You should buy the newspaper El Tiempo and select the appropriate ads. Furnished rentals are also numerous. In Bogota, you can choose to live in the North (call 104 # 22), in the so-called rich neighborhoods (estrato 6). The neighborhood is quiet, very pleasant to live in, and near the Transmilenio. Living in Chico (between 92 and 96) may also prove to be attractive in terms of outdoor places, even if the rent price (it costs 1.000.000 pesos for furnished apartments, administration fees included) and utilities (estrato 6) are expensive. Indeed, it should be noted that the prices of utilities (water, garbage, electricity, gas, telephone) are much higher if you live in estrato 6 than if you live in estrato 2 (in the district of Candelaria, utilities are really economic).

Cost of Living
You can enjoy the quality of the food yet still pay low prices in restaurants in Colombia. Restaurants of La Zona Rosa, such as Corral, Crepes and Waffles or Wok will cost you between 15.000 and 20.000 pesos (between 5 and 7 euros). However, you should get used to eating rice and chicken 3 or 4 times a week. In Colombia, the rumba is a veritable institution and therefore requires a budget. A beer in a bar costs 1.500 pesos (0.5 euros). A cocktail in the Parque in 93 costs between 13.000 and 18.000 pesos (between 4 and 6 euros), discos generally require a cover of 10.000 pesos (3.5 euros).

Money
In Colombia, withdrawals are limited to 500.000 pesos (165 euros) and for each withdrawal, a levy of 6 to 7 euros of commission is made. It is better to pay by card than to withdraw money from a cash distributor.

Telephone
Having a cell phone is essential in Colombia (especially since it is common for the fixed phone, available in each apartment, to be blocked so as not to make calls to mobile phones). Note that you can't benefit from a package (3 months of bank statements are required with a minimum duration of 12 months) and that you should buy a prepago card which will cost about 30 to 40.000 pesos per month. You can have unlocked your phone from your home country and then buy a SIM card in Colombia. Activating it and assigning a new number should not cost more than 30.000 pesos (10 euros) with 10.000 pesos of communication offered. The choice of the operator depends largely on the operator used by your friends, as the cost of one call varies from one to three depending on whether you call the same operator or another. The operator Comcel offers good rates.

Health
Colombian universities require from international students about 50.000 pesos to pay per semester for medical insurance. No vaccinations are required for Bogota. However, if you want to travel in Colombia and especially in more tropical areas – the Atlantic coast (Santa Marta, Tayrona) or Amazonia – it is recommended you get vaccinated against yellow fever before leaving (your certificate of vaccination will be asked in order to enter natural parks). In the case of Amazonia, it is also recommended to take medication against malaria such as Malarone. Finally, it is advisable to pay for a complementary medical assurance to cover the medical care you might need in Colombia.

Transportation
Although the taxi may surprise you by its very inexpensive price, it is preferable to travel by bus as the distances are often quite long. During your year of study in Colombia, you can enjoy not only the inter semester vacation in December/January, but also the week break at the mid semester to travel.

Official Selection of the Best Business Schools in Colombia

Learn the ranking results of the best masters in Colombia here: