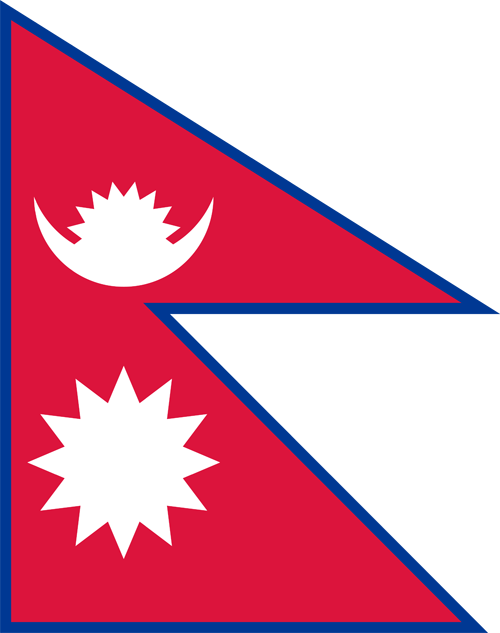 Information for Foreign Students in NepalGetting There The ceasefire signed by the Maoists has seen the opening up of routes with new airlines in the country. There are direct flights from Kathmandu to Bangkok with Thai Airways and the flag carrier Nepal Airlines. Currently Nepal Airlines doesn't offer yet an online booking system. You can make reservations through agencies. One-way tickets from Kathmandu to Bangkok cost USD 220 (including all taxes), Singapore, Hong Kong with Dragon Air/Cathay Pacific. ArkeFly flies direct to Europe (Amsterdam, Netherlands). Many European destinations can be reached via Doha with Qatar Airways, Abu Dhabi with Ethihad, Dubai with Emirates or the low cost carrier FlyDubai, Bahrain with Gulf Air. Flights are also available via Delhi on Jet Airways and UAE on Air Arabia. Nepal's Tribhuvan International Airport is located just outside of the Ring Road in Kathmandu. The terminal is a one-room brick building with a large wooden table serving as both customs and immigration. Tourist visa of 15 days or more is available on arrival. Money can be changed to the local currency as well, but these services are only available directly after scheduled arrivals.

Obtaining a Visa Visas for citizens of most countries are available on arrival at the land borders and at the airport in Kathmandu at a cost of US$25 for 15 days, US$40 for 30 days and US$100 for 90 days multiple entry visa. Tourist visa can be granted for a maximum of 150 days in a visa year. You can pay this in Nepali Rupees, US dollars or Indian rupees. The Nepali Rupee is tied to the Indian Rupee at a rate of 1.6. Note 500 Indian Rupee notes are not accepted. To obtain a visa, you need to bring one passport photo. Nationals from Afghanistan, Cameroon, Ethiopia, Ghana, Iraq, Liberia, Nigeria, Palestine, Somalia, Swaziland and Zimbabwe need to arrange a visa before arriving.

Accommodation
Budget accommodation in Nepal ranges from around 250 NPR to around 750 NPR for a double. Cheaper rooms usually do not have sheets, blankets, towels, or anything else besides a bed and a door. Most budget hotels and guesthouses have a wide range of rooms, so be sure to see what you are getting, even if you have stayed there before. Accommodations will often be the cheapest part of your budget in Nepal.

Money
Currency used in Nepal is the Nepalese rupee, although Indial currency is valid as well. There are banks in Kathmandu, Pokhara and in several other major cities that will allow you to retrieve cash from ATMs or using your credit card.

Health
Gastrointestinal problems are common; filter or treat your water or use bottled water, making sure the lid is sealed. Get vaccinated and consider prophylactic treatment, as tropical diseases are common as well. Altitude sickness is also rampant for newcomers who are unused to the high altitude, thus it is good to take daytime conditioning hikes that push acclimation then return to a more reasonable elevation at night.

Safety
Nepal's cities are safer than most. Even pickpockets are rare. Still, don't flash cash or make ostentatious displays of wealth, out of respect for the non materialistic reality of the people. There are strikes ('bandas') and demonstrations to contend with. Businesses close and transportation halts. Ask about strikes at your hotel and make sure you have enough money to last. Food and water are still available in hotels, and much business goes on behind closed doors. Rallies and demonstrations are routinely charged by police wielding laathis or long sticks. Tourists should keep a low profile, and to avoid confrontations.

Transportation
The Micro Bus has become very popular lately. They are 10-12 seater buses with very fast service. It has almost replaced local bus service given its fast service. While before it had few routes, the Micro Bus has come up with many other alternate routes and now has good coverage. The fare is more expensive than the local bus. Local Bus - Although the system can be confusing they are cheap. They can be crowded at times both with people and domestic animals such as goats, ducks etc. Some buses will not depart until full to a certain quota. Rickshaw - Good for short jaunts if you don't have much luggage and don't mind being bounced around a bit. Bargain before you get in, and don't be afraid to walk away and try another. Taxis - There are two types of taxi -- 'private', which pretty much run from the airport to your (upscale) hotel; and '10 Rupee', which don't leave until they are full. When haggling for fare remember that Taxi drivers have been hit hard by the petrol crisis sometimes queing up overnight to get 5 litres of petrol at twice the market price. So be sympathetic but don't get ripped off! Offer to pay 'meter plus tip', 10% is more than enough.

Official Selection of the Best Business Schools in Nepal

Learn the ranking results of the best masters in Nepal here: