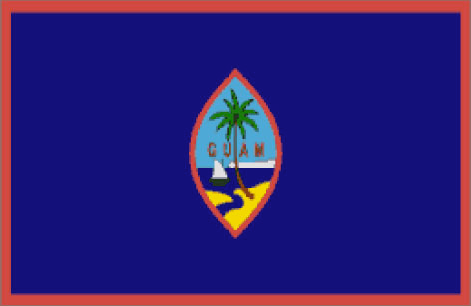 Information for Foreign Students in GuamGetting There Won Pat Guam International Airport (GUM) is the only civilian gateway to the island. The airline servicing Guam is Continental Micronesia or Air Micronesia (as formerly known), a branch of Continental Airlines, which offers non-stop service to Honolulu with onward connections in Honolulu to Los Angeles, Newark, and Houston. It also offers non-stop flights from Guam to Cairns in Australia, as well as most major cities in Japan, Palau, Manila and Cebu in the Philippines, and many of the Federated States of Micronesia.

Accommodation
The main tourist area is around Tumon Bay, which has a number of high-rise hotels and resorts similar to Waikiki Beach. Cheaper accommodations exist near the airport, especially around the village of Harmon. Be aware that Harmon hotels tend to be on the seedier side since Harmon is a mixed industrial/residential neighborhood. Many of the flights scheduled through Guam to other locations (especially in Asia) often require an overnight layover, so plan ahead. Some hotels offer airport pickup, as taxis can be quite expensive.

Telephone
You can buy a local sim card for 600 Lek (Vodafone). You need to provide ID (passport) and give an address in Albania.

Money
Currency used in Guam, being a territory of the United States, is the US Dollar.

Health
The civilian Guam Memorial Hospital is in Tamuning, in the Central Region. If you have access to military bases, there's a Naval Hospital.

Safety
Observe caution when engaged in water activities on Guam, as in any coastal area, as currents can be swift and unpredictable, depending on the season.

Transportation
Driving is fairly simple and similar to the mainland US. Roads are not graded to US standards and are very slippery in rain, take caution. The main route on the island is Marine Corps Drive/Guam Route 1 (Better known as Marine Drive). On main roads in Guam, expect congestion. Buses are available, but the frequency at which they operate is low, you may end up waiting +1 hours for a bus. Walking is only possible in the central business districts of Hagåtña and Tumon. Walking anywhere else around the island is hazardous due to dangerous vehicular traffic and the lack of sidewalks.

Official Selection of the Best Business Schools in Guam (U.S.A.)

Learn the ranking results of the best masters in Guam (U.S.A.) here: