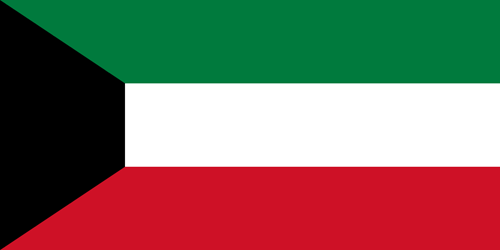 Information for Foreign Students in KuwaitGetting There Kuwait International Airport is Kuwait's only airport and is served by several airlines, mostly flying within the Middle East. The national airline, Kuwait Airways, serves New York City, London, Paris, Frankfurt, Geneva, Rome, Kuala Lumpur as well as several other European, Asian, African and Middle Eastern destinations, but is best avoided: a government monopoly of the worst kind, its planes are old, delays are frequent and the staff couldn't care less. Premium airline Wataniya Airways serves Vienna, Istanbul and several other regional airports, For regional flights, semi-low-cost carrier Jazeera Airways provides a welcome alternative. Alternatives for long-haul flights include British Airways from London, United Airlines from Washington, D.C., Lufthansa from Frankfurt, KLM from Amsterdam, Singapore Airlines from Singapore, Thai Air from Bangkok and Turkish Airlines from Istanbul, plus connections through other large Gulf hubs (Dubai, Doha, Abu Dhabi, etc) are accessible through Emirates Airlines, Qatar Airways, Etihad Airlines, Gulf Air and many other airlines, There are also some airlines that operate seasonal flights to Kuwait including Malaysia Airlines, Ukraine International Airlines, Bulgaria Air and Czech Airlines. If you need a visa on arrival at the airport, do not head down to Arrivals, instead look for the 'Visa Issuing' desks. Pick up a queue ticket, fill out a form and wait for your number to be called to submit and pay (dollars, euros, pounds and GCC currencies accepted), then pick up your stamped passport at the other end. As of January 2009, the visa issue desks now have signs indicating that payment is only accepted in Kuwati dinars (3 dinars for a tourist visa). You can exchange currencies at several places in the arrival terminal; the best rates appear to be for U.S. dollars, Australian dollars and Euros. You'll also get an A4-sized sheet entirely in Arabic, which you must keep -- this is your visa! You can now proceed straight through immigration without queuing, just show your visa form and they'll let you through.

Obtaining a Visa The nationals of 35 countries, including the US and most of Western Europe, are eligible of visas on arrival at Kuwait's airport and land borders. The on-arrival visa is valid for a single entry of up to 3 months and costs KD 3, plus KD 3 for a 'stamping' fee (not required for US, UK, Bahrain, United Arab Emirates, Oman, Qatar and Saudi Arabia). Those 35 nations include: United States of America, United Kingdom, France, Italy, Germany, Canada, Australia, New Zealand, Japan, Netherlands, Belgium, Luxembourg, Switzerland, Austria, Sweden, Norway, Denmark, Portugal, Ireland, Greece, Finland, Spain, Monaco, Vatican City, Iceland, Andorra, San Marino, Liechtenstein, Brunei, Singapore, Malaysia, Hong Kong, South Korea and Poland. All other nationals need advance visas, which require an invitation from a sponsor in Kuwait. Kuwait Airways offices and major hotels can provide invitations, but the process can take up to a week and may require a fee. This website (http://kuwait-embassy.or.jp/english/k-j/visa.html) has some more detailed information. Israel nationals are banned by the Kuwaiti government from entering the country, and you may also be refused entry if your passport has Israeli entry stamps.

Accommodation
Hotels in Kuwait are expensive, but major Western chains are well represented. Light sleepers should bring ear plugs as public announced prayers are broadcast at 4:30AM, again at 5:00AM and several times during the day.

Money
Currency used in Kuwait is the Kuwaiti dinar (KD, KWD). AT around US$3.50 to one dinar (Jan. 2009) the dinar is the highest valued currency unit in the world. Higher end establishments accept credit cards.

Telephone
As roaming charges can be very steep, it makes sense to get a local SIM card: prepaid starter kits are available for around KD 5, including some call time.

Health
Public health is entirely supported by the government at local clinics and hospitals, with a 5KD fee paid by foreigners visiting Kuwait and 2KD for expats with a resident visa. Private non-governmental clinics are available as well, but charge much more at 30KD and upwards. You will be entitled for free treatment in case of an accident or an emergency.

Safety
The crime threat in Kuwait is assessed as low. Violent crimes against foreigners are rare. However Kuwaiti drivers can be quite reckless so be careful of the roads.

Transportation
Kuwait's public transport is adequate with three companies (KPTC, City Bus and KGL) running dozens of routes in every major city. Waiting times for buses range from one minute for most frequent routes to fifteen minutes for less used routes. All buses are equipped with air-conditioners and usually one can find a seat without much trouble. These are recognizable by orange license plates and may be hired by the day, in which case fares should be agreed beforehand. Most taxis are metered although one has to inform the driver in advance if one wishes to pay by the meter as drivers.

Official Selection of the Best Business Schools in Kuwait

Learn the ranking results of the best masters in Kuwait here: