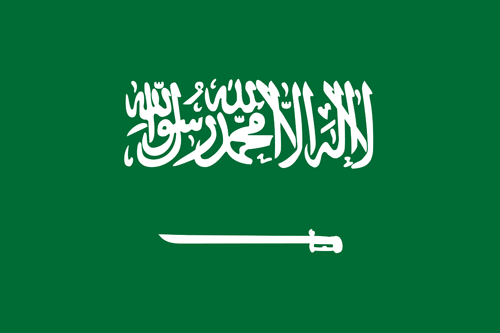 Information for Foreign Students in Saudi Arabia Getting There Saudi Arabia has 3 international airports at Riyadh, Jeddah, Medina and Dammam. The airport at Dhahran is now closed to civil traffic, so passengers to the Eastern Region now fly into Dammam, or into nearby Bahrain (which is much better connected) and then cross into Saudi Arabia by car. Saudi Arabia is served by the national airline Saudi Arabian Airlines, often referred to by its Arabic name Saudia. Saudia has a reasonable safety record, but many of their planes are on the old side and the quality of service, in-flight entertainment etc tends to be low. Virtually all Gulf airlines and most major European airlines fly into Saudi. During the Hajj, numerous charter flights supplement the scheduled airlines. Foreigners living in Saudi Arabia can often get sensational discounts on outbound flights during the Hajj. Airlines from Muslim countries are flying in many loads of pilgrims, and do not not want to go back empty.

Obtaining a Visa
Saudi Arabia has some of the most restrictive travel policies in the world, and advance visas are required for all foreigners desiring to enter. The only significant exception is citizens of the Gulf Cooperation Council nations. Also exempt from visa requirements are foreigners transiting through airports for less than eighteen hours, but many other entry requirements, such as the dress code and restrictions on unaccompanied females, still apply. Nationals of Israel and those with evidence of visiting Israel will be denied visas, although merely being Jewish in and of itself is not a disqualifying factor. (There are, however, anecdotal reports of would-be visitors who tick the 'Jewish' or 'Atheist' boxes on their visa application having trouble.) Saudis prefer not to grant visas to unaccompanied women, but work permits are common in some fields - esp. nurses, teachers, maids - and possible for anyone if your sponsor has enough connections. The fun doesn't end when you get the visa, since visas do not state their exact expiry date. While the validity is noted in months, these are not Western months but lunar months, and you need to use the Islamic calendar to figure out the length: a three-month visa issued on '29/02/22' (22 Safar 1429, 1 March 2008) is valid until 29/05/22 (22 Jumada al-Awwal 1429, 28 May 2008), not until 1 June 2008! Depending on visa type, the validity can start from the date of issue or the date of first entry, and multiple-entry visas may also have restrictions regarding how many days at a time are allowed (usually 28 days per visit) and/or how many days total are allowed during the validity period.

Accommodation
Hotels of all types are available throughout the Kingdom. Most tourist cities (i.e. Makkah, Medina, Taif, Al Abha) will also have very affordable and spacious shigka-maafroosha (short-term furnished rental apartments). Shigka-maafroosha owners generally loiter in hotel lobbies. Often, they will approach civilized-looking people (generally families) and make an offer. Prices for shigka-mafrooshas and small hotels are always negotiable to a great degree. Smaller hotels will only accept cash, normally in advance.

Cost of Living
Prices are generally fairly expensive: figure on US$50/100/200 for budget, midrange and splurge-level daily travel costs.

Money
The Saudi currency is the Saudi riyal (SAR). Saudi Arabia is still largely a cash society, and credit card acceptance is surprisingly poor outside luxury hotels and malls. ATMs are ubiquitous, although those of many smaller banks do not accept foreign cards; Samba, SABB and ANB are probably your best bets. Moneychangers can be found in souks, but are rare elsewhere. Foreign currencies are generally not accepted by merchants.

Telephone
The three mobile operators in Saudi, incumbent Al Jawal, Emirati rival Mobily and Kuwaiti newcomer Zain (Vodafone Network) are fiercely competitive, with good coverage (in populated areas) and good pricing. A starter pack with prepaid SIM and talktime starts from about SR 75, and you can sign up in most any larger mobile shop (bring your passport). Local calls are under SR 0.5/minute, while calls overseas are around or less than SR 2/min.

Health
There are no major health risks for traveling in Saudi Arabia: water is generally drinkable and food is usually, but not always, hygienic. No vaccinations are required for general travel to the Kingdom, but for pilgrims joining the Hajj and its extraordinary concentrations of pilgrims from all corners of the globe, a comprehensive series of vaccinations is required as a condition for entry. The Kingdom has a wide-reaching national health-care system, but the services provided by this program are quite basic. Private hospitals are often run with the participation of foreign partners. These facilities range from fairly rudimentary to very advanced and very expensive. Pharmacies are widely available and prescriptions are not required for most medications. Psychoactive medications are tightly controlled and available only through government pharmacies.

Safety
One of the biggest dangers in Saudi Arabia is the haphazard driving; thus, pick your drivers carefully and always wear your seatbelt if available. In general, keep a low profile and use your common sense, especially if you are a single woman.

Transportation
Within cities, taxis are the only practical means of transportation. Standardized throughout the country, metered fares start at SR 5 and tick up at SR 1.60/km, but outside Riyadh you'll often have to haggle the price in advance. Solo passengers are expected to sit up front next to the driver: this has the advantages of being next to the full blast of the air-conditioner and making it easier to wave your hands to show the way.

Official Selection of the Best Business Schools in Saudi Arabia

Learn the ranking results of the best masters in Saudi Arabia here: